This pictorial tutorial is for getting this pedal working WITHOUT LEDS. I'll reverse the polarity later and make a post on how to do that. For now you get a working pedal with no LEDS.

OK So, got my Duel, great price, and with an EQ or resistance pad in the EFX loop it's perfectly serviceable for bedroom levels. Now I just want a footswitch for it. Now for about $100 I can get one already made. That's a fair deal for a fair day's work. But, 1: I'm a cheap bastard, 2: I like futzing around making things work, and 3: It doesn't look right. I know, that's shallow, but a Peavey footpedal should look like this: 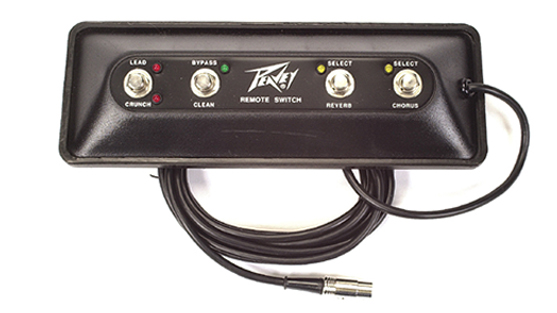 So I bought the footswitch for the Stereo Chorus 212 which has a similar setup, replacing chorus with tremelo. The changes needed are VERY minimal. Really only a few changes are needed to get it working without any LEDs.

First we start on the DIN end, remove this screw: 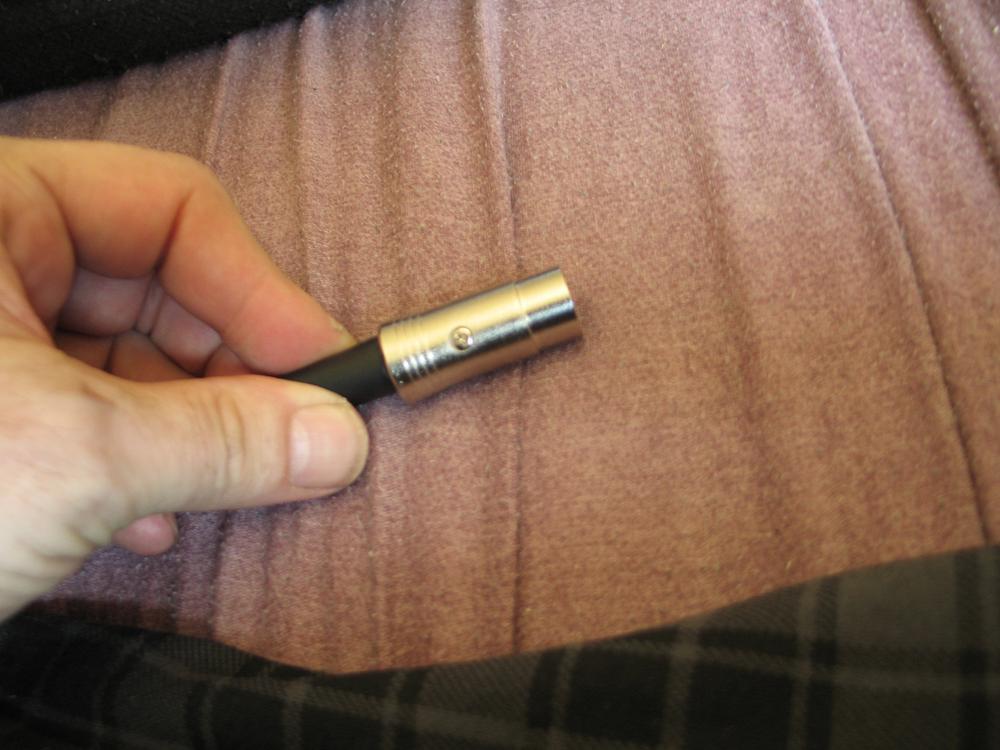 Push the cable through the outer casing and you get this: 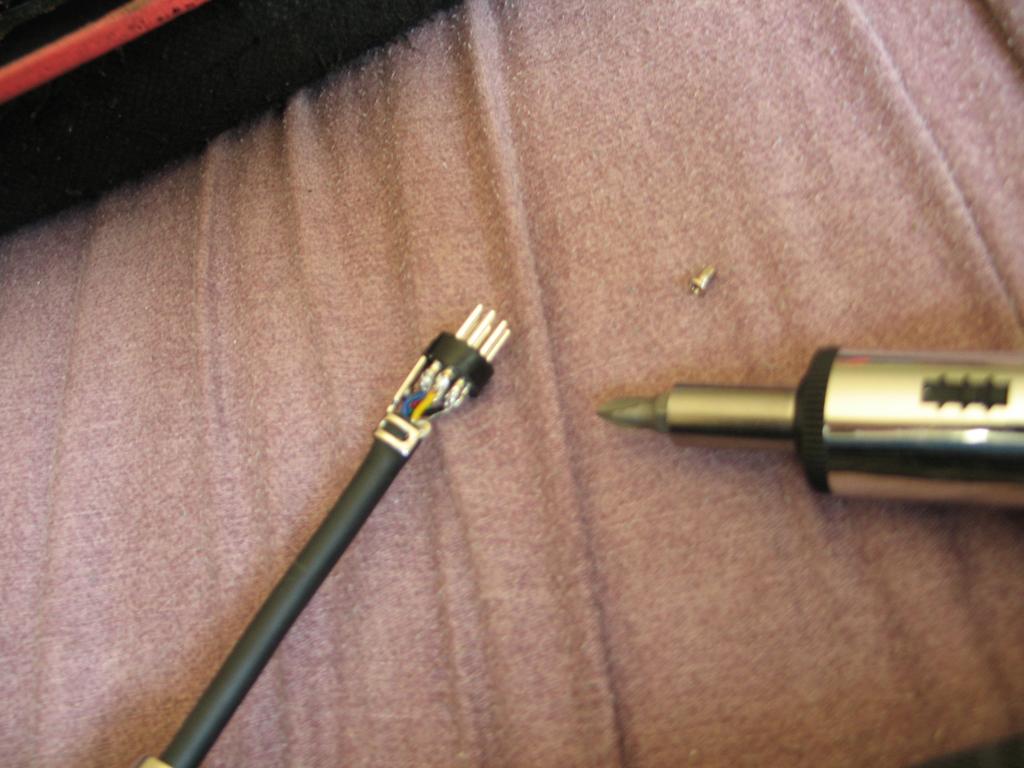 There will be three wires, in order, going yellow, blue, and white on the side we're looking at. Desolder the white wire. Otherwise you'll get weird noises on the EFX loop when the pedal is plugged in, this connector is marked NC but I wonder. Anyway, it's a ground wire inside the footswitch, so I just opened up the clamps there and shoved it in there and clamped it back down. Swap the blue and yellow wires so that the new order is blue/yellow/no connection: 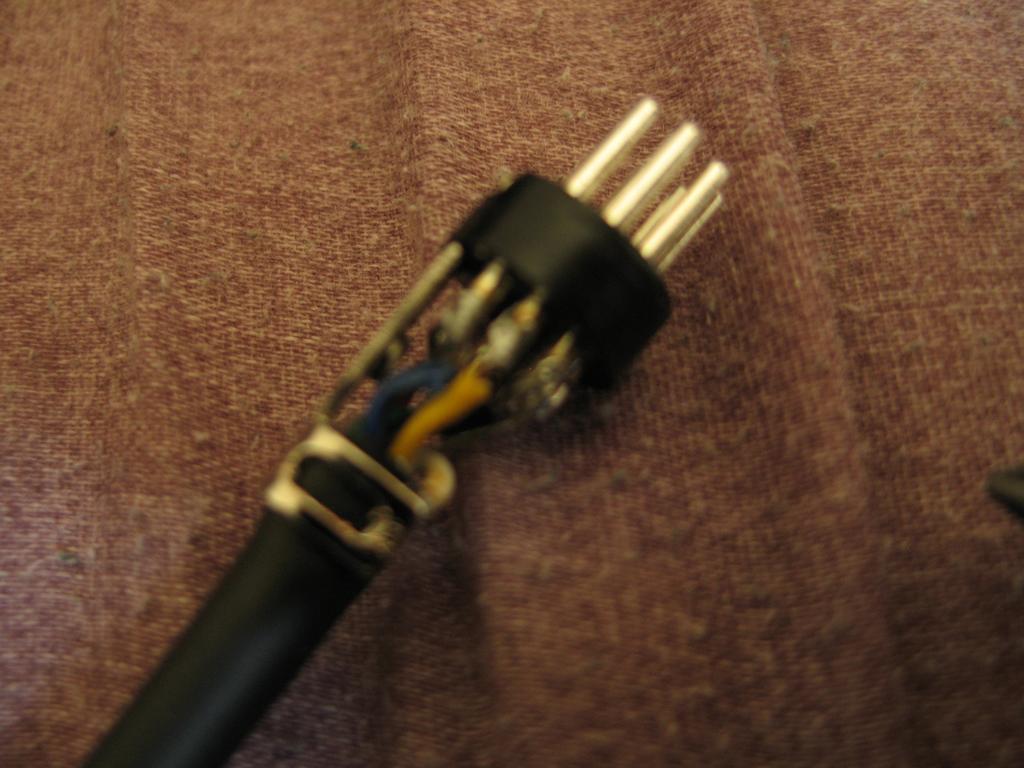 Sorry it's a bit fuzzy but you get the point.

Put the cover back on and put the screw back in before you lose it.

Now, we open the foot pedal. Get a butter / table knife. and pry the cover over the pedal base and run the knife around the pedal to get the cover off. Unless you're a gorilla it should be fine. Once it's open, you'll see something like this: 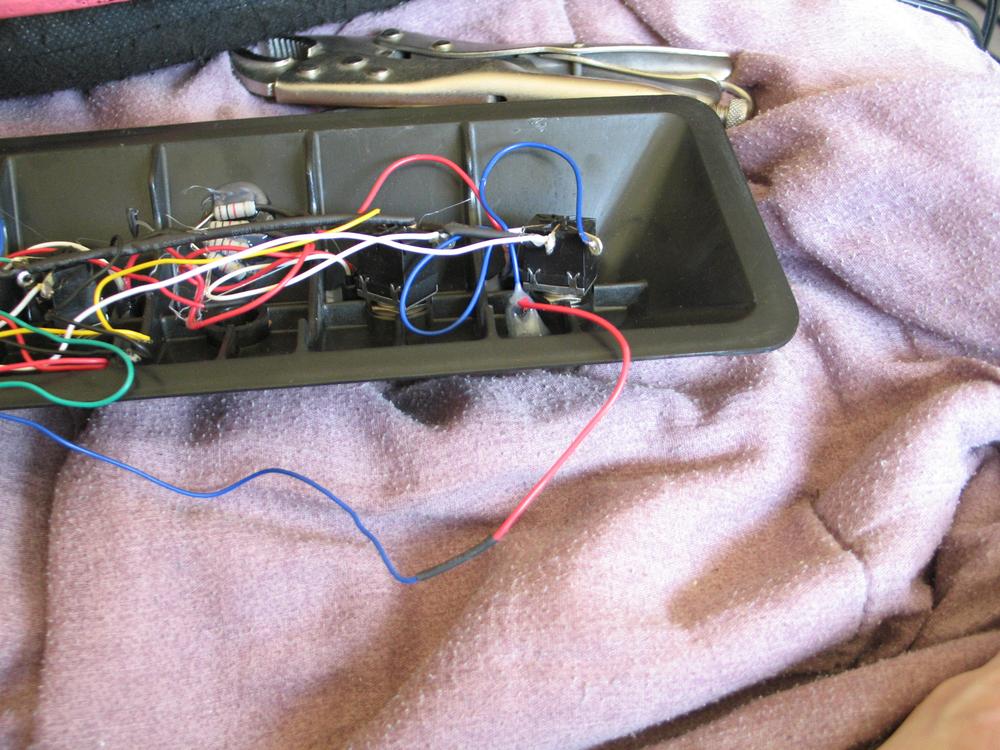 All the wiring that's there stock is FINE for this mod, except that blue to red one. We're gonna desolder both outside connecting wires on that far right switch, the one for switching Lead / Normal(crunch). Then we're gonna cut that blue wire off right at the junction with the red one, bare the end, tin it, and then solder it to the nearest connector (either side will work btw) of the switch. It should now look like this: 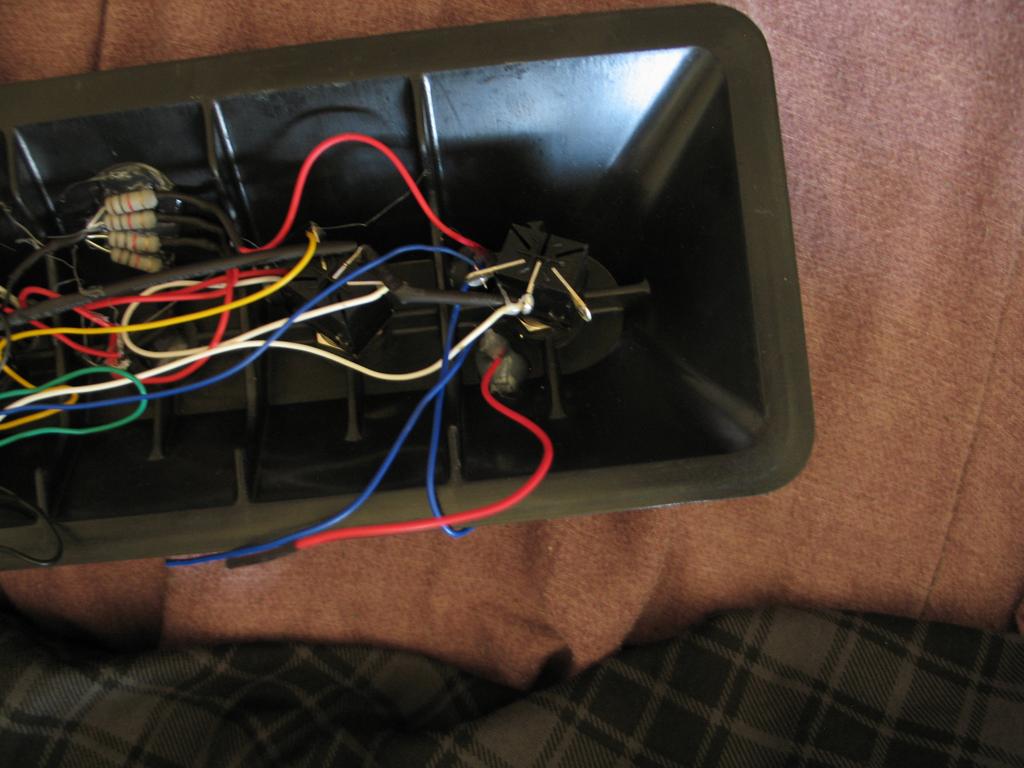 That's two blue wires cut, and the red one with heat shrink on it disconnected as well. The blue wire from the plug is going to one side of the switch.

Put cover on, hook up switch, rock on. Crush your enemies with 120W of Quad 6L6 power!

Next up, I'll be reversing the polarity of the LEDs and probably hooking that switch back up etc. But that's next weekend, I got playing to do.

OK Now for LEDs. Got a bug up my posterior and decided to get them working too. I suspected it was as simple as reversing the connections to the LEDs, and it was. Literally cut every red wired coming from a dropping resistor in half, and cut the other wire leaving the LEDs in half, then cross connect them. Here's a picture of the connections: 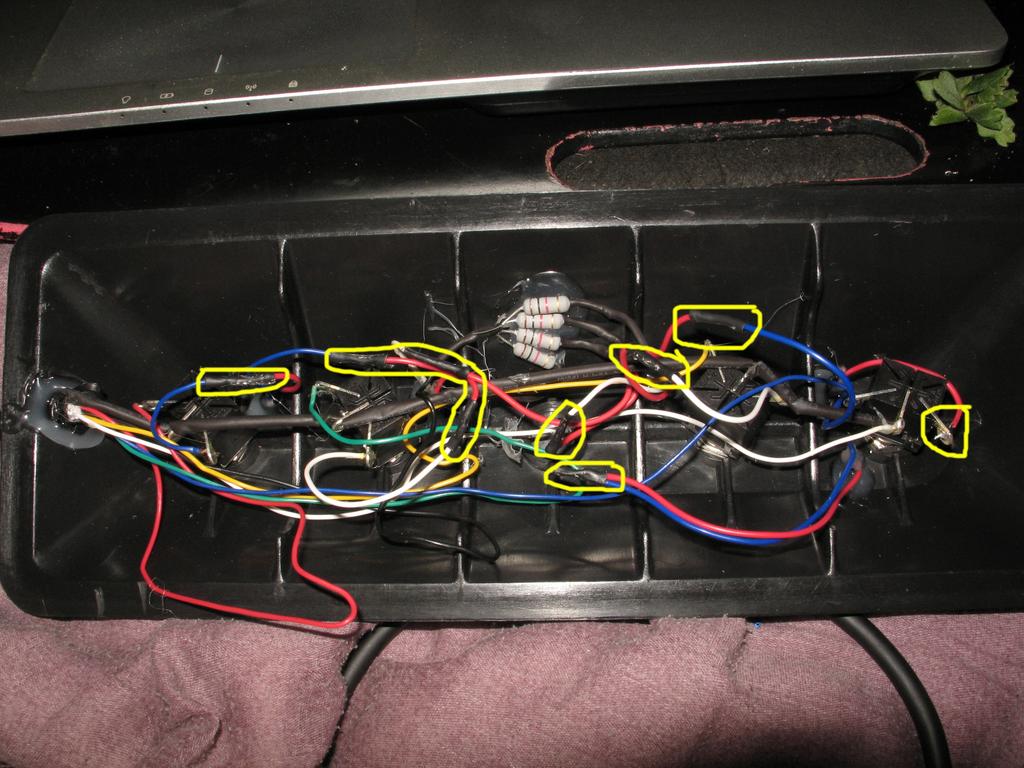 note that i didn't bother getting both of the two LEDs on the lead/clear switch working. One is good enough for me.

And a beauty shot with all the LEDs lit up: 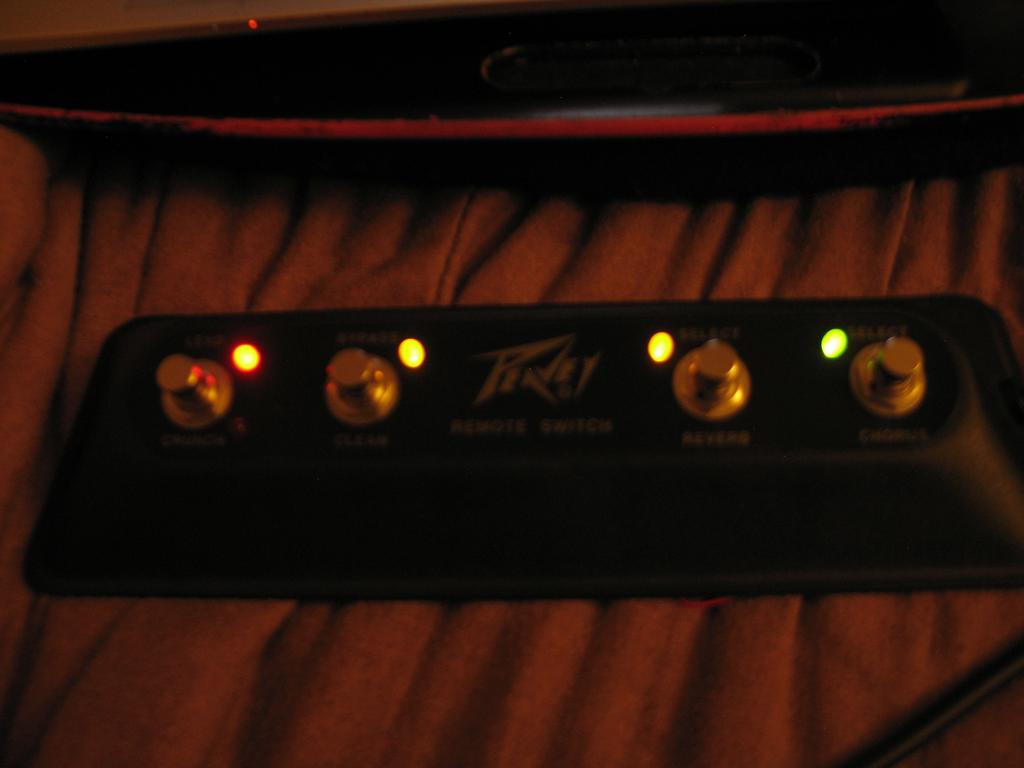