I just registered here because I saw the thread about Fujigen, where it's stated that their SG models are discontinued.
Such a shame!

I wanted to share some of my own experience, because I

I originally wanted to buy an FGN LS-10 (Les Paul style) and had played a DC-10 just out of curiosity.
What can I say, I liked the DC-10 guitars better across the board than the LS-10, LS-20 and LS-30 models from FGN.
I tried quite a few of both.

The DC-10 guitars were that good that I bought 2 of them in 2016 (one red and one white).
When I saw last year that the guitars were no longer in production, I bought a third one in black because the stock at the retailers dried up quickly - and I don't even think there were that many around at least here in Germany, roughly estimated maybe ~30 per year? At least that was my impression when I checked where they are sold.

When I bought the first ones I also compared the DC-10 with the Gibson SG Standard - of course I did.
Both cost about the same, but the Gibson still had a case, the FGN only the gigbag.
So from a rational point of view the Gibson was the better deal also considering the resale value (and you know how Gibson prices increased the last years...) - but I liked the FGN better than the Gibson SG. No contest here, The neck is a bit thicker, the fretwork and overall craftmanship much nicer and believe it or not - none of my three DC-10s have the typical Gibson SG neckdive. It's just not there - so the changes of the body shape and proportions are just awesome!

The neck is very comfortable to play and has a long tenon.
The poly lacquer is thin and not sticky.
The weight of each of my DC-10 guitars is just a tiny bit under 3 kg.
All hardware is from Gotoh including aluminum stoptail piece (fyi the LS-10 and LS-20 don't have the aluminum stoptail).

The only thing I didn't like were the FGN humbuckers with Alnico 8 magnets - so I swapped them out.
I do that anyway with most of my guitars...

I played quite a few of the DC-10 models and most of them were really good!
Only 2 of all I tried were so-so.. not completely crap but they didn't wow me.
I picked the ones I liked the best.
Of course every guitar has its own voice and my 3 don't sound the same.
That's why I wanted to mention that!

If everything is done right these are some of the best SGs you can buy!
Simple as that!
That's my honest opinion.

Here are some photos of the white and the red one (that I made when I bought them, hence the stickers on the pickups): 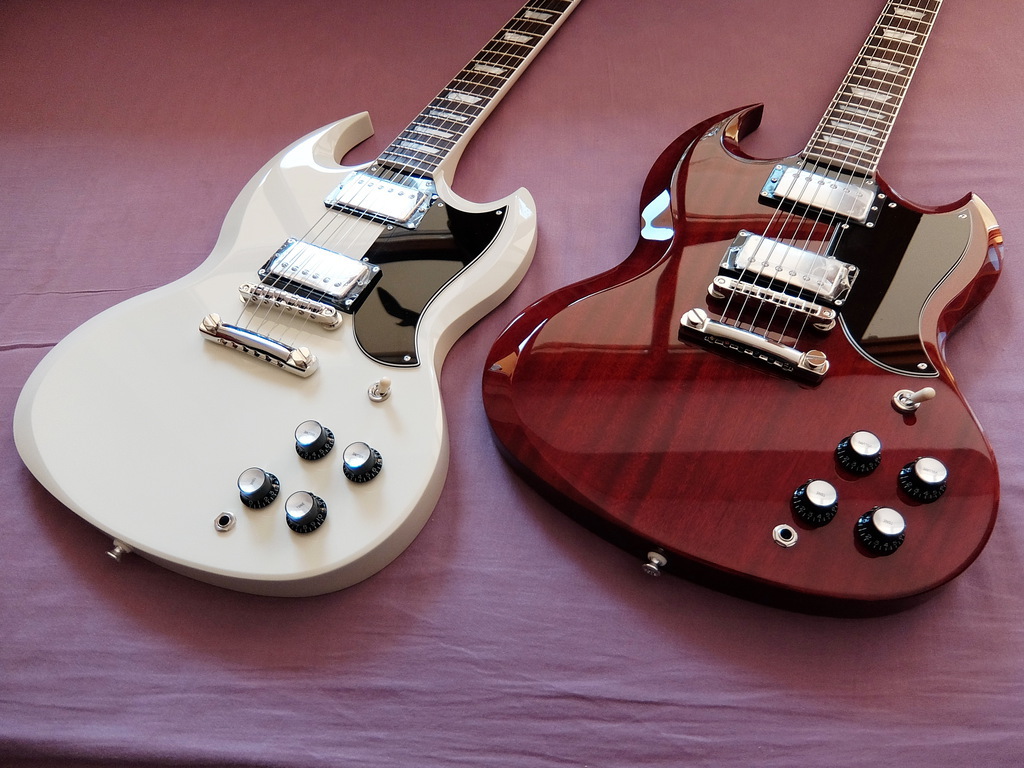 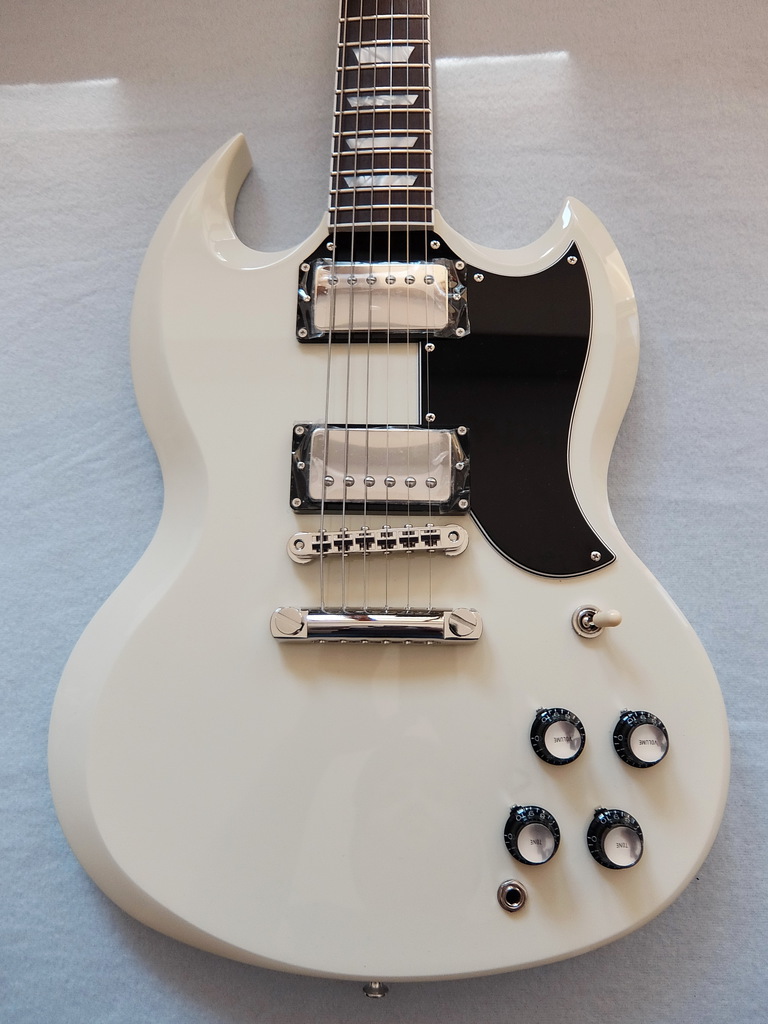 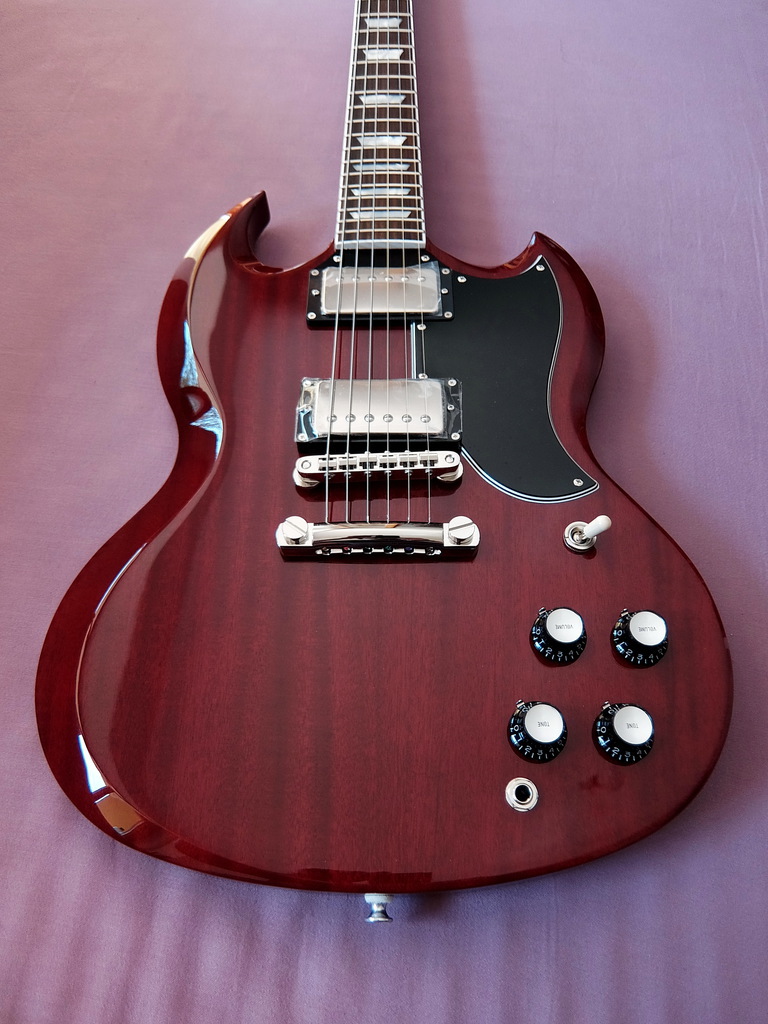 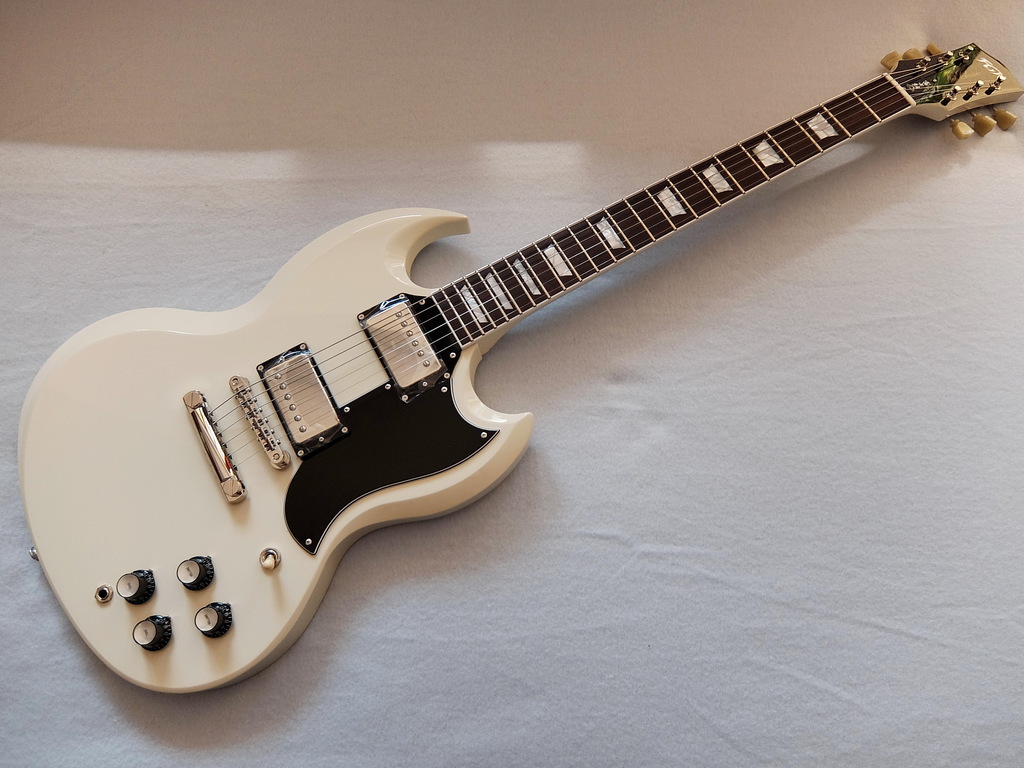 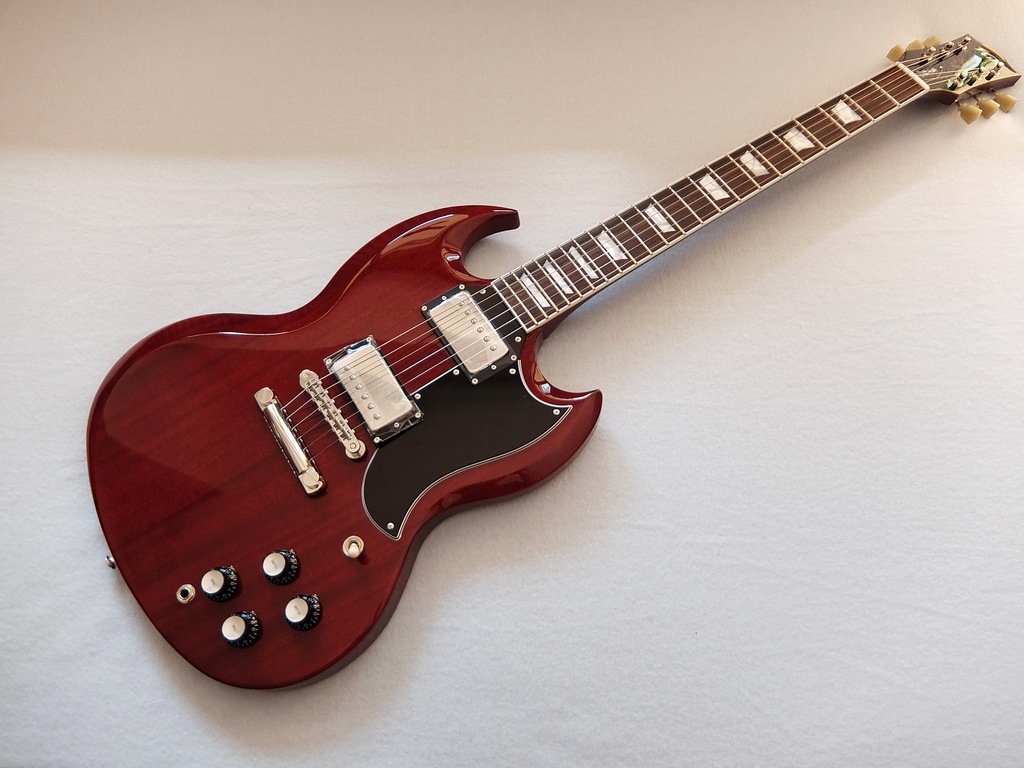 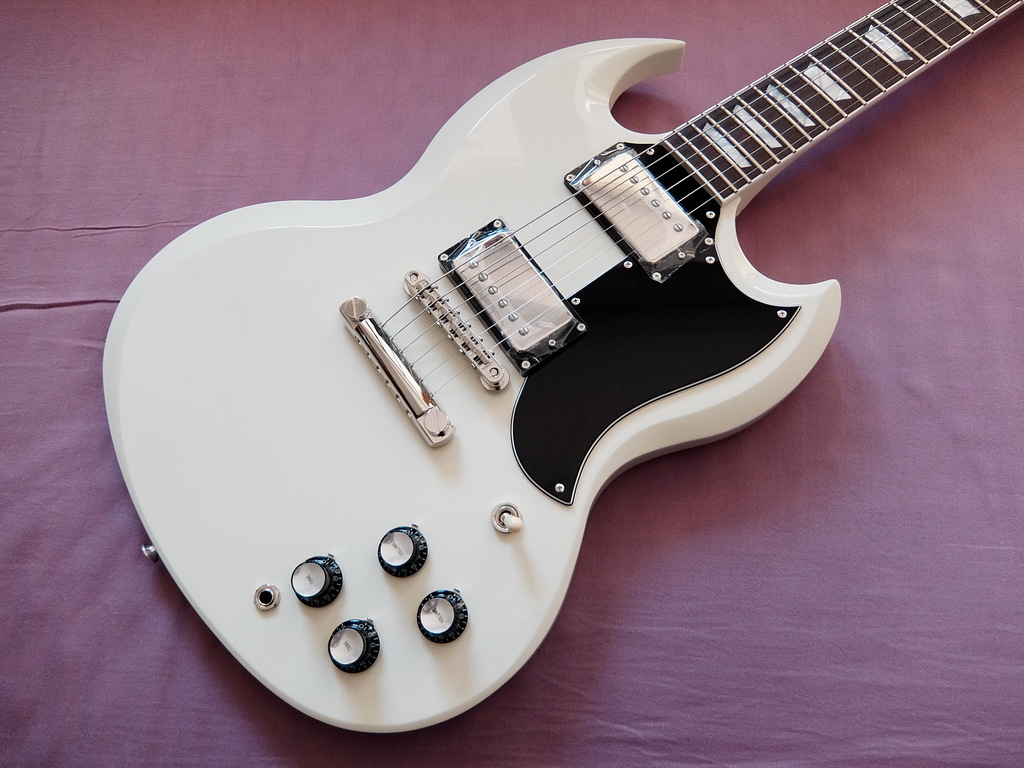 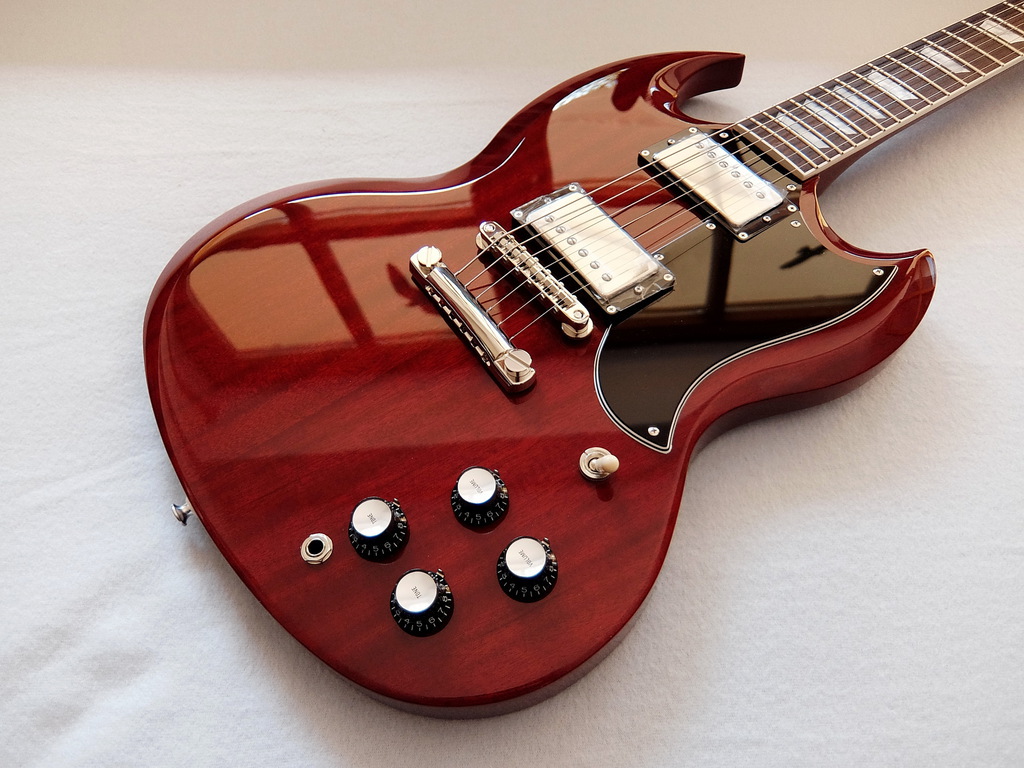 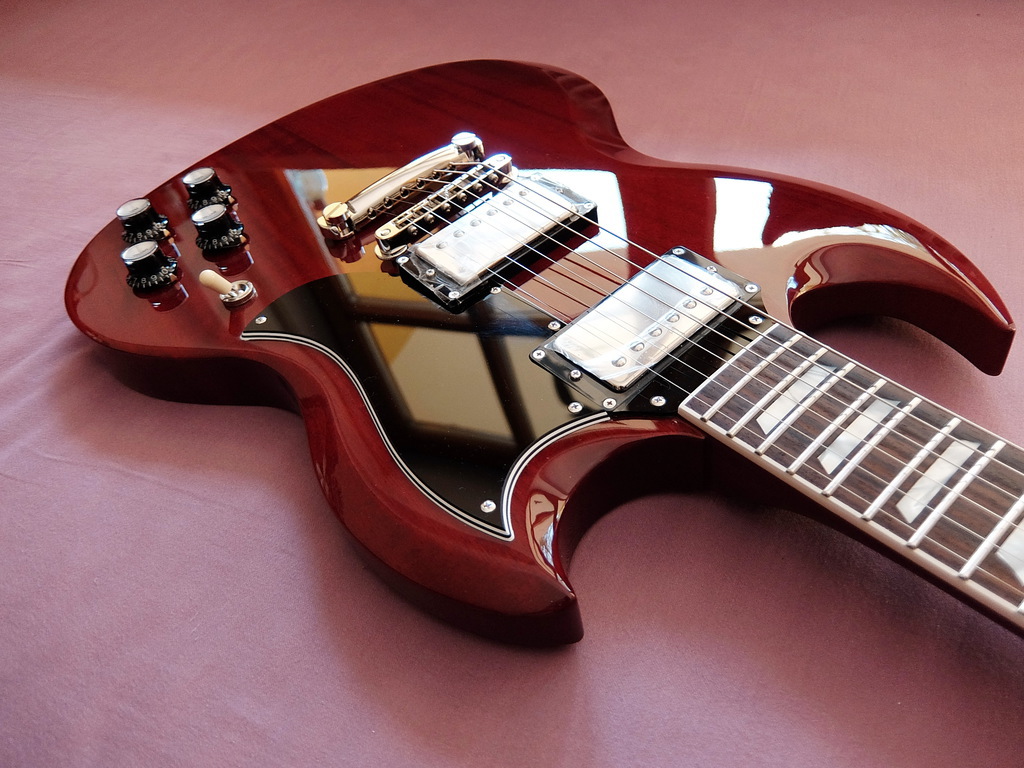 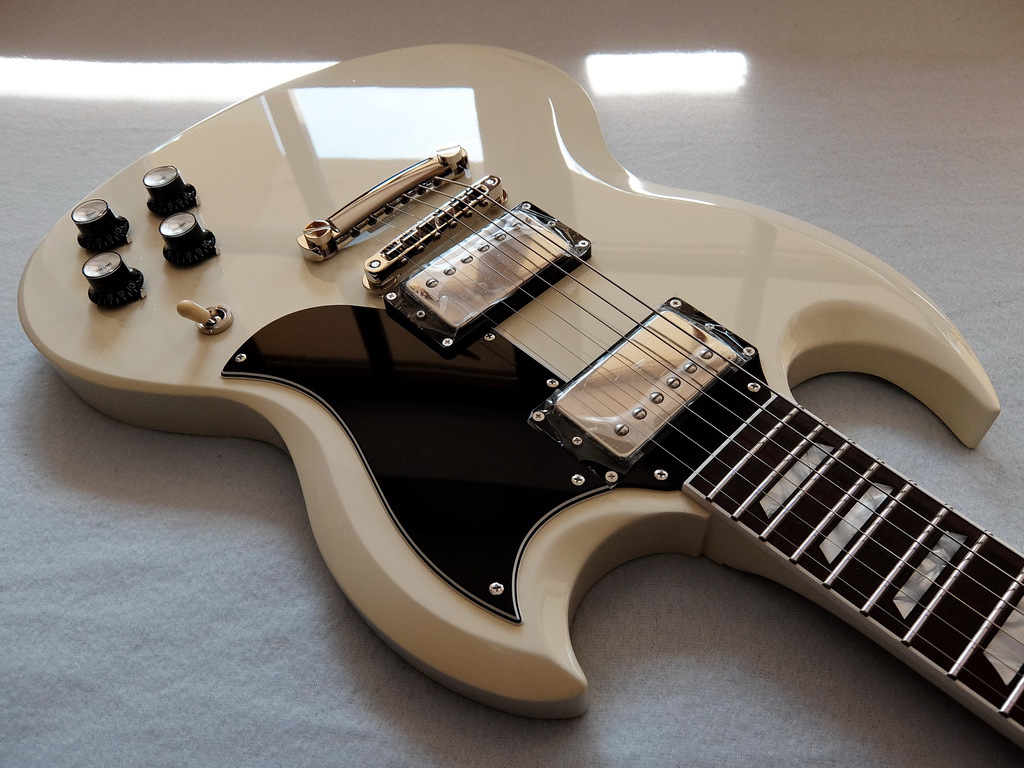 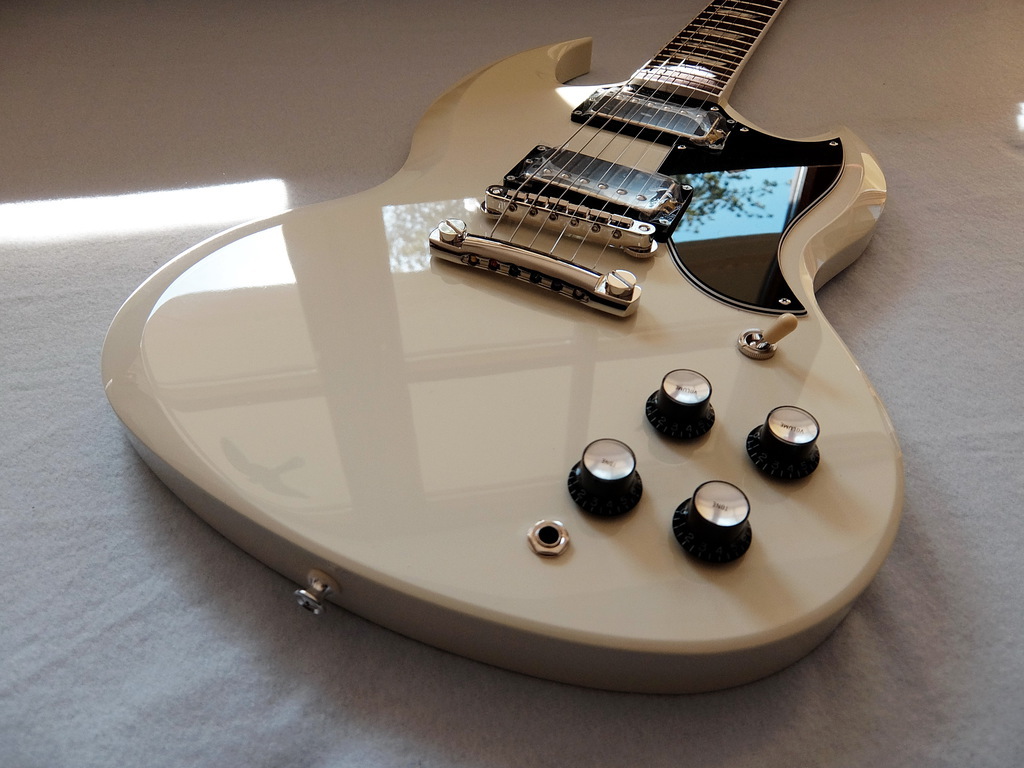 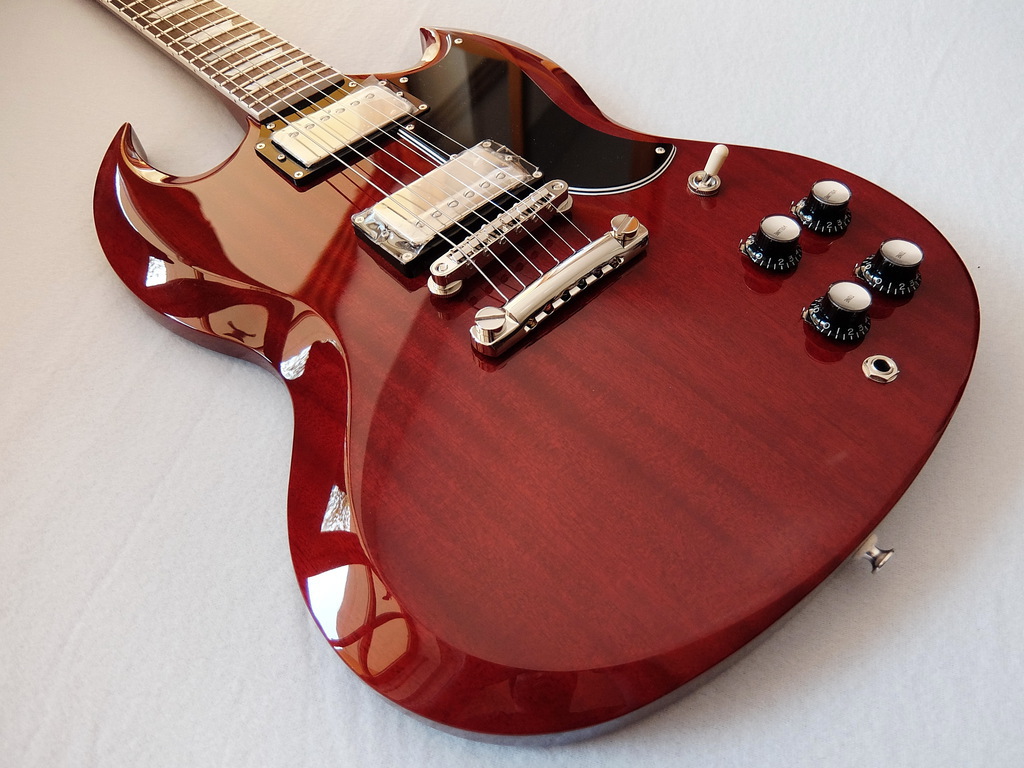 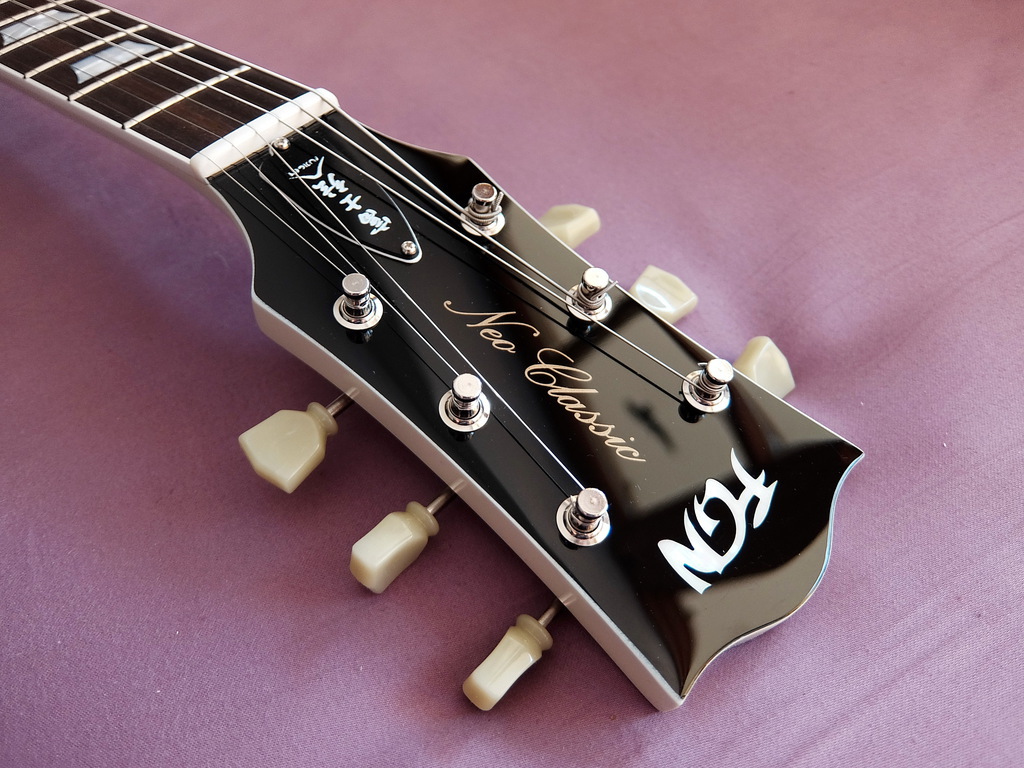 I haven't made nice pictures of the black one yet iirc.

In the other thread someone said the FGN DC-10 is like an ESP Viper.
I can assure you that this is not the case. The Viper has a thicker and offset body and jumbo frets.
Plays and feels almost more like a Les Paul.

The frets on the FGN are medium-jumbo (height around 1,1-1,2 mm).
Width at nut is 43 mm, neck thickness 1st fret ~22 mm, 12th fret ~25 mm.
Don't let these numbers stear you away - it's very comfortable to play even with smaller hands!
Japanese guys probably don't have the biggest hands either, so I guess that's why they nailed it with the neck profile!

Pics of the long neck tenon - everything is neat and fits perfectly: 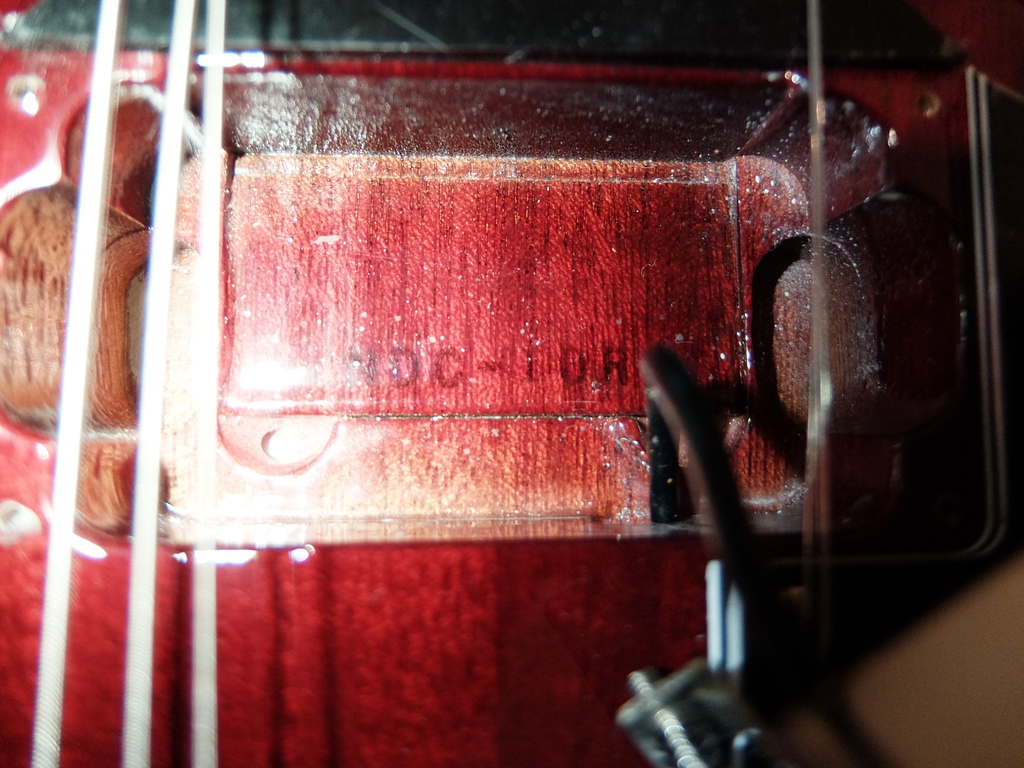 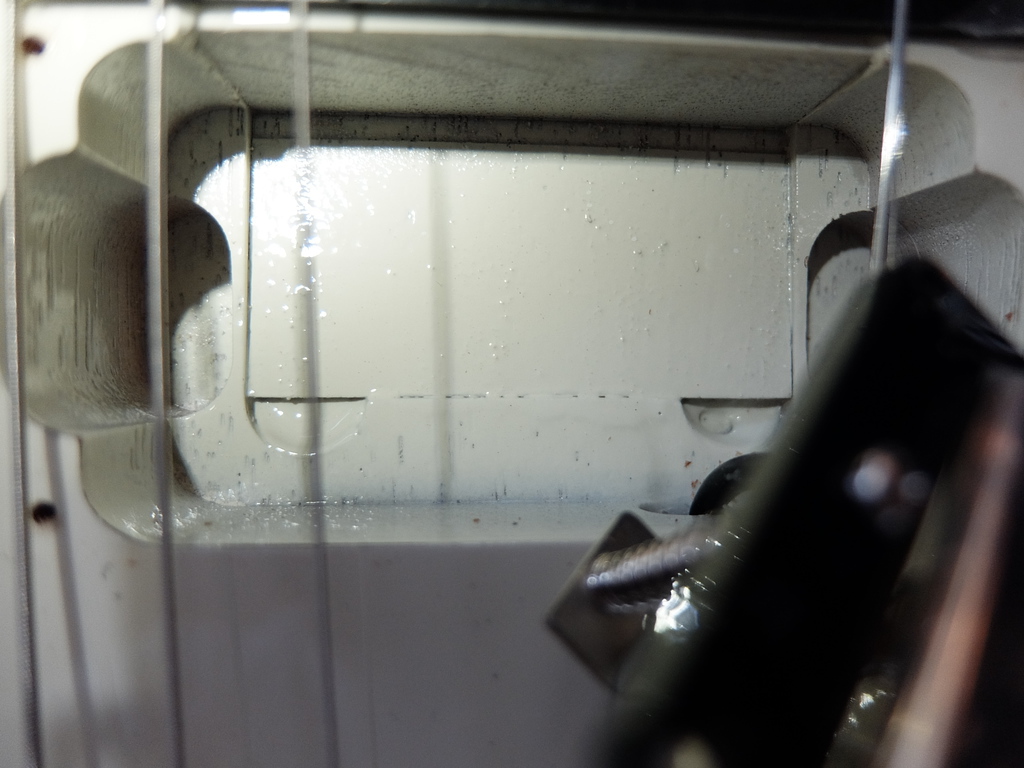 I highly recommend trying out the DC-10 guitars if you have a chance to.
I know they were not that popular because they were more or less the same price as the Gibson SG Standards.
So FGN sold way more of the LS and LC (Les Paul style) guitars because they were noticeably cheaper than Gibson Les Pauls.

I see the DC-10 as an extremly underrated guitar model.

Who knows maybe it will become a very sought after guitar in a few years when you can't buy them new anymore.
The old Epiphone Elite/Elitist SGs are loved ones too, they were also made in the Fujigen factory.

I personally don't care for the resale value because I don't plan to sell them.
I do keep an eye on the used market though just out of curiosity, but I don't buy even more ones - 3 are enough for me.

If you have any questions about the FGN DC-10, please let me know!

Wow, those are some sexy guitars man! I have a Fujigen built history that I love so I'm a fanboy as well. Those look exceptional though. Just wow.

Very cool. I'd probably agree on the pickups, Alnico 8 must be really bright. And good to know they were only sold in the EU, I'll be adding these to the SG Wiki eventually. I've only just started on japanese copies.

FGN make good guitars, Made in Japan guitars have good reputation but the design is not very sexy IMHO.

PermissionToLand said:
Alnico 8 must be really bright.
Click to expand...

These are a bit of a strange mixture.
Around 7-8 k'ish (I measured them, don't remember the exact values right now) but super strong fully loaded A8 magnets.
I'm not the biggest fan of A8 magnets in general but I even haven't tried other magnets because I wanted to put different pickups in these guitars anyway.


PermissionToLand said:
And good to know they were only sold in the EU
Click to expand...

At least the DC-10 with that particular body shape was made for the EU.
FGN has also SGs with the Gibson shape, they are for the Asian market.


papagayo said:
but the design is not very sexy IMHO.
Click to expand...

I'm very happy with it and prefer it over the original shape to be honest, because the lower horn isn't "in the way" (not that I had problems with the original longer lower horn - but I bet some guys do) - and the big plus is that there's no neck dive which I think is a result of the different proportions.

YES! I just got a Fujigen made History SG (SH-SG) and the workmanship/playability blows anything else I own away--including my Gibson Les Paul Standard! I have a Gibson SG Special as well, which I enjoy quite a bit, but this Fujigen made guitar is on another level.