So I was perusing GC's web site and they had a red stripe US made bandit for $119, so I pretty much had to get it to complete my red stripe collection (all I need now is the 2x12 red stripe Transformer I guess.) It showed shipped a couple days later, and the tracking number didn't work.

Oh well, shipped it to my local store. I ship to local store so if it comes broken in shipment I don't have to worry about proving it etc. So after 3 weeks I'm really starting to wonder where the heck my amp is. Call CS today and the lady checks it and finds that it came in to my local store last Friday. Not yesterday, the week before yesterday. Hell I've been in twice for minor stuff since then.

So I go to get it, and they can't find it anywhere in the computer system. Go to the back room, and it's sitting in a box that never got checked in.

Guy brings it out, we open the box, and this thing is in like new condition. Seriously, looks like it rolled off the assembly line a month ago.

I'll take some pictures of it tomorrow, if I can make myself stop playing it for a few minutes.

That'll clash horribly with your yellow guitar, so best send it to me.

&, pictures or it never happened!!!

Cool deal! Worth the wait. Let's see it, preferably with its kin! 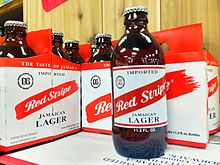 Or my favorite " red " beer

ESG, I knew you were faking it claiming to be a cheap Bastard

OK the sun's up, just gonna go get some breakfast and I'll get some pictures made. Also gonna get some other pics done I've wanted for a while.

OK I was gonna take them outside and stack them up, but having gotten out of the hospital a little while ago for stomach surgery, lifting heavy things is kind of a bad idea, so here they, in my messy room. First, the little brothers: 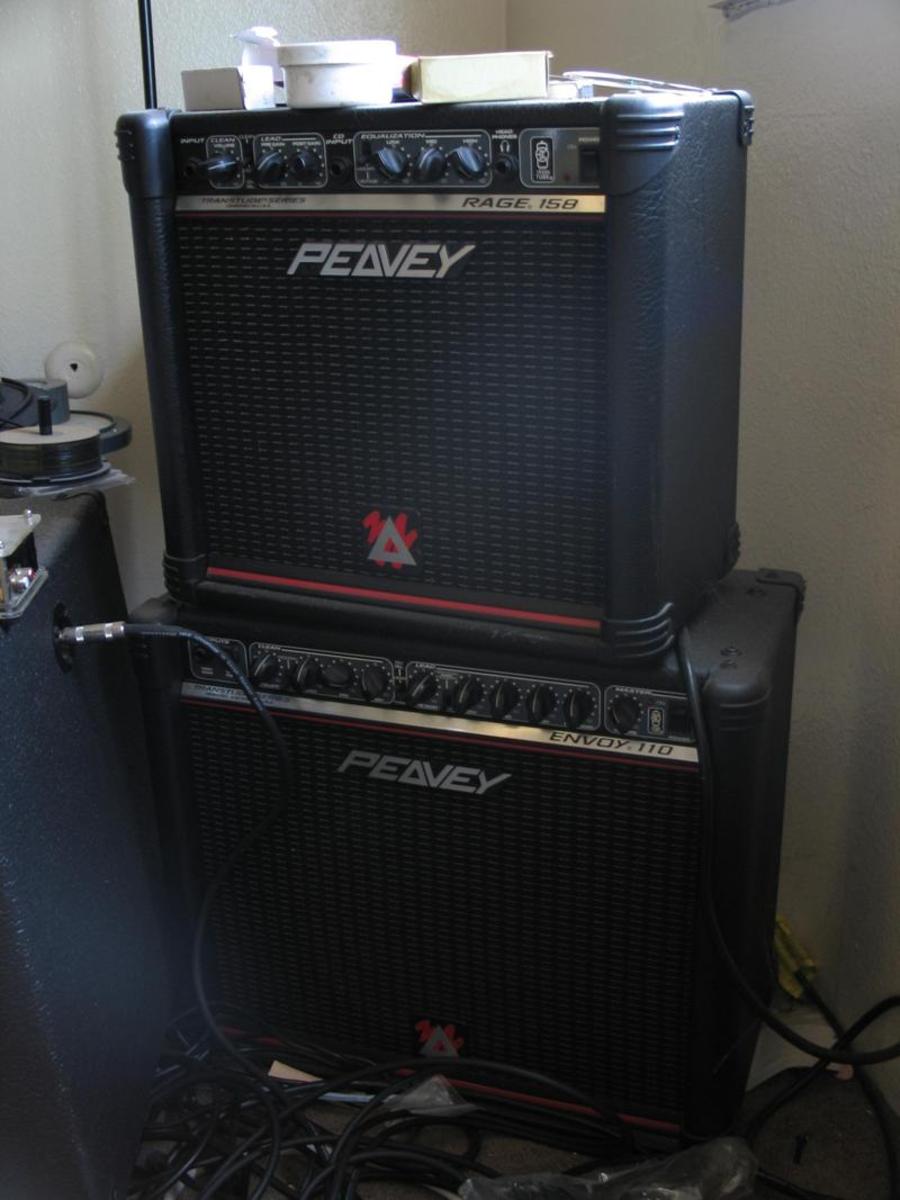 And the star of the show, the block logo red stripe US made Bandit: 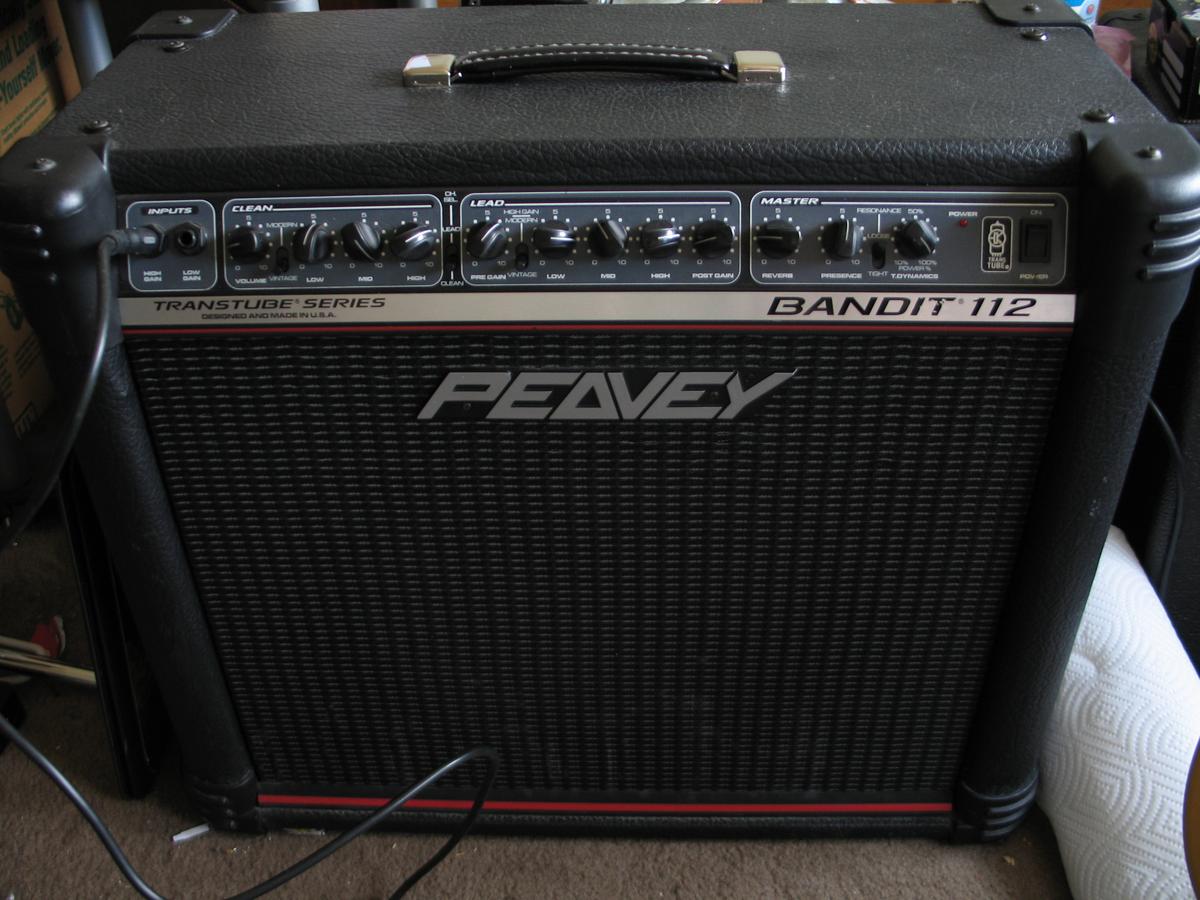 I'll put those paper towels to use cleaning up the few little bits o dust and stains on it. But seriously, it's in great shape and it sounds good!

Oh yeah cool I put me a GH!2 anniversary in that baby and Blow up some sh$t

Brilliant amp...just seen a video of it...the one in the video sounded like a million bucks...good job

They are pretty amazing. Not sure I'll replace the speaker but twinned up with my closed back 1x12 and it's Jensen Falcon it really does open up a bit while getting serious thump going as well.

Location
Out on the Tiles, in New Jersey

That is awesome. Nice score!

I' bought a PEAVY Bandit 112 Sheffield USA made, very good amp to practice, it can work better on 2 x 12" cabinet. The amp section can work with 4 Ohm loaded, +3 dB efficiency and incredible presence. Good score.

I've been looking for a Bandit and since they have been produced for so many years, there is a dizzying array of them. While I know the Red Stripe ones are most often recommended, did you ever come across a good descriptive list of the versions and speakers included with comparisons? A youtube video of a 'flight' of Bandits comparing old to new(er)?

No youtube video, but there's a great thread on the Peavey forums.

History and Timeline of the Peavey Bandit

Basically the simplified classifications are:

Pre-Transtube: 1981 to 1989
Early Transtube (Teal or blue stripe Bandit 112) 1990 to 1995
Silver Strip Transtube: 1995 to 1999
US Made Red Stripe: 2000 to 2004. Block logo (mostly) and Sheffield speaker. Generally the most highly sought after Bandit
Chinese made Red Stripe: 2004 to 2005, generic "blue marvel" speaker and pointy logo. Good amps, but not as highly regarded as their US built counterparts.
Modern Peavey Bandit Transtube (AKA Cyclops): 2005 to present, Chinese made, I think they sound great. Don't care for the silver knobs as they're impossible to read in low light conditions etc. Metal corners. I think these sound as good or better than Red Stripe series for high gain, but the Red Stripes are still better at crunch / vintage style sounds.

Note that there are Rage 158 and Envoy 110 models that followed the same timeline starting around 1995 or so. The block logo, red stripe version of them share the same basic tone shaping circuits in a smaller set of packages. The Red Stripe Rage 158, and Envoy 110 in particular represent a GREAT deal in terms of tone, cost, and size. Note the Red Stripe Envoy and Bandit have reverb pans in them, not digital reverb. The Rage has no reverb.
You must log in or register to reply here.
Share:
Facebook Twitter Reddit Pinterest Tumblr WhatsApp Email Share Link