New pedal day! I recently stumbled upon and can’t stop listening to an album called Influence by a band (er, artist, it’s apparently one guy) called Everything In Slow Motion. It’s a little bit of post-hardcore, a little bit of riff-rock, a little bit of pop-rock, and a lot of ambient guitar stuff throughout... So I was really inspired to try some really reverb-heavy stuff myself. I consulted a few friends on the book of Face and who were into synth-like, ambient stuff, and they suggested the Boss RV-6, which I went to get... And accidentally ended up with this: 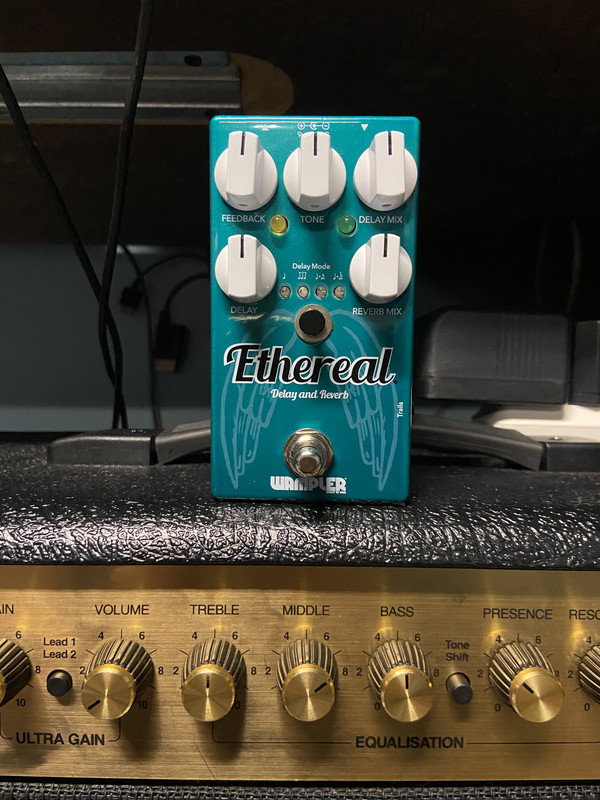 The Wampler Ethereal. It’s a delay and reverb specifically for big, “washy” ambient stuff. It’s super easy to use with its five knobs and two selector switches, and as a bonus it’s a serviceable digital delay or plate-style reverb if you only want to use one or the other. Of course, it sounds best when they’re used together, and there’s a lot of interplay between the controls (e.g. the feedback, tone, and delay time knobs also affect the reverb).

The killer feature is that it’s also a double-delay - in addition to a simple quarter-note delay that can be dialed in from 20ms to a full second, it also can add a triplet or dotted eighth sub-delay, and this wild dotted eighth that feeds back on itself. The result is some great delay sounds you’d ordinarily need two (or three!) separate delay pedals for. Cranking up the reverb can kind of “swallow” the delay, so you can let the delay kind of run wild when dry or add a lot of warble to the texture of the reverb. The feedback knob also allows for self-oscillation, and the trails can be engaged or disengaged.

The price tag came off the moment I watched the Wampler YouTube demo and found that, at its fastest speed of 20ms, the Ethereal’s delay creates a natural chorus, and adjusting the feedback and delay mix affects how deep and how present the chorus sounds.

It’s a one-button pedalboard that’s so easy to use, you can adjust and dial in whatever you want in a few seconds. Wampler hit this one out of the park. It’s not the most varied or featured reverb or delay I’ve heard, but it’s one of the easiest to use and the features that it does have really set it apart from other competitors. It’s the honeymoon phase, but I’m calling this one an instant keeper.
Last edited: Nov 1, 2020
You must log in or register to reply here.
Share:
Facebook Twitter Reddit Pinterest Tumblr WhatsApp Email Share Link