Show me your Telecasters

Just Esquired this Affinity yesterday, its pretty damn badass i think! Still need to finish the wiring once i get all the parts, its just wired to the stock stuff right now.

I'm cheating here really because I have two Tele necks, but three Tele bodies: The butterscotch '54 style one is just so heavy that I wasn't playing it, so I used the neck on my white blonde Classic 50s and in turn the 7.25" radius neck off that one went onto the Cabronita build.

Currently debating whether to do a 'smuggler's route' on the butterscotch body to lighten it and then fit a neck humbucker. I'd need a third neck to make it into a complete guitar again and I don't really need another guitar (I've got 11 electrics as it is), so I think I'll just end up selling the loaded body instead. I've got my SG if I want to play something with a neck humbucker and my SG is already nice and light. :)

The '54 style Butterscotch when I first built it (as an Esquire), with the Classic 50s lacquer white blonde:

The recent Cabronita build; I'm not happy with the colour (it's supposed to be 'Pewter' which is a metallic grey rather than the more bluish shade it looks), so I'm going to strip it down in spring and refinish it. I think I'll leave the pickguard off though as I like the stripped back look: Current Tele that I have. It's a 2006 Deluxe Nashville. Stock Tex Mex pickups replaced with SD Alnico Pro 2's.
Stock 5 way switch replaced with Fender Super Switch to allow middle position to be changed from middle alone to neck/bridge combination without push/pull pots or any additional switching.
Nice guitar, a little heavy for my taste, but when I was looking, I wanted CAR and maple fingerboard.
Walked into mom/pop local music store (Dec. 2012) and this NOS guitar was hanging there. 10 minutes later, I'd made a 20% off deal and walked out the door.
My wife later told me, "I've seen you take longer picking out shoes".....
6

NGD Nashville Tele | Fender Stratocaster Guitar Forum (strat-talk.com)
Upper left.....my well-bastardized 1964 Tele that I had from 1981 to 2001.
Body had been stripped, neck pickup replaced with Bill Lawrence Fat Strat pickup.
Previous owned had taken a black marker and filled in the Fender spaghetti headstock logo.
Stock tuners needed replacing, so for good measure, I put a set of Mini Schallers on it to take It further from stock. To clarify, the tuners were all I changed. All the other changes were done before I got it.
It was a player, not a collector Tele.
Never once had to adjust the truss rod on it for the 20 years I had/played it. 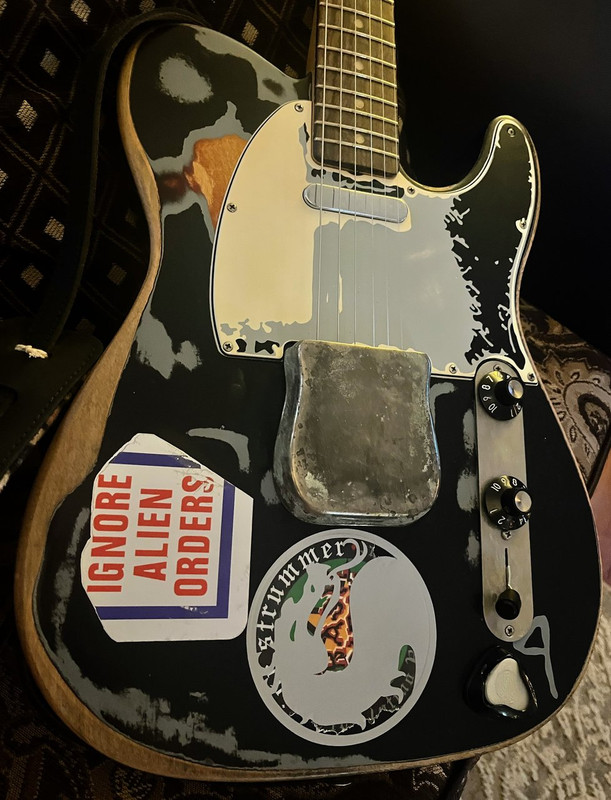 10lbs on the button.