What do you think of this upgrade on a Gibson LP Standard?

Do you think this was worth the £1500 in upgrades or should I have left it as it was? It plays absolutely brilliantly!

Don, I wonder if you coulda helped your countryman and made him a 3d Printed one for lots less.

Just kiddin. Now I will watch the video.

Paul, I am in agreement with Don. If it makes you happy and the job they did was up to the level of exceptional craftsmanship that meets your scrutiny, that is all that matters.

Enjoy your Les Paul for all it is created to be.

Paul, here is a funny tidbit. In my state called Maryland, We have a town in the suburbs of Baltimore County called Essex as well.

DonP may already know this and may have seen my "Upgraded" Les Paul. I had to ask myself if I had made a prudent decision having made a similar proportionate outlay of cash for upgrades to my under $400 USD Epiphone Les Paul.

Here is mine and the details of the upgrades are, first I put a set of 1979 T Top uncovered Gibson pickups in it. These pickups alone were almost as expensive as the guitar itself was. The second mod was to have a bone nut cut and installed by a very good luthier in Baltimore. The nut install cost between $100 and $125 USD if I remember right. So, all in all my mods cost more than my guitar did.
BUT, along with that nut came a pro setup and he told me he attended to any frets that were loose or sprouting on the ends. He said Epi does not use glue on their frets so it happens sometimes.

that's gonna be a hard pass for me.
Perfect guitar for that band...

personally I dislike the Darkness and Poison with the same extreme vigor.

"What do you think of this upgrade on a Gibson LP Standard?"
It's posted in the wrong forum.

Biddlin said:
"What do you think of this upgrade on a Gibson LP Standard?"
It's posted in the wrong forum.

I don't think it is. Can you imagine the snot-storm that awaits him over there?

Biddlin , you are soooo bad.

Other guitars might be the appropriate sub forum, but why should he observe the titles, no one else does anymore. Hell, we'll have PRS questions here before long.

Biddlin said:
Other guitars might be the appropriate sub forum, but why should he observe the titles, no one else does anymore. Hell, we'll have PRS questions here before long.
Click to expand...

My PRS SE wraparound is the best fixed bridge for exact intonation. Why can't other companies do that.

"Upgrade" seems to be a highly subjective term... Would chicks know the difference? No. Money better spent on beer then. (or a cheap red second hand car with a Ferrari sticker on the hood to drive them home in after the gig)

I would have tried to keep the black one as is.

Then find a beat-up one that needed new frets to do the rebuild with.

I'd be concerned about the neck's strength & integrity now along with the frets holding into that reflective material.

It's possible the one you've copied has a stronger maple or somehow reinforced neck in the first place.

You wanted an honest opinion . . .

Well my immediate thought when I launched the video was, “oh, that poor sap upgraded a fake.” I saw the split diamond with no binding on the headstock, I saw the inconsistency of the black burst paint thickness and the single ply binding on the body and just everything said fake to me. And then I started the video and saw that he started with a real Les Paul standard... which made all the red flags make sense. If I was the one modding, I wouldn’t have done the split diamond, it would’ve made the whole thing pull together better.

Biddlin said:
Other guitars might be the appropriate sub forum, but why should he observe the titles, no one else does anymore. Hell, we'll have PRS questions here before long.
Click to expand...

LOL , Biddlin I think Don P and myself thought you meant wrong forum as in MLP or somewhere like that.

I bought a 2007 SG faded special... it cost me about $600. I fell arse over teakettle
for that guitar, right in the store. But I couldn't leave it as it was issued.

I love that guitar fiercely. So I bought lots of mods for her, and have about
$1700 into it before I decided she was everything I wanted and didn't need
any more mods. I named her Luna. Every time I put that instrument down
after a session, it's with the spoken or unspoken acclaim, "What a great guitar..."

So am I going to criticize anybody's mods, after they've already done them
and PAID for them? No. Sometimes no means Hell NO. I say Rock that Sucker.

Part of the mod process is that it's FUN! It's fascinating to see what can happen
if you just buy one more cool thing to install.

There's a lot of things I wouldn't do to a guitar. But this forum is home to players
of all stripes, so we ought to just say, "Coolio" and let the man enjoy his investment.

In the end, that's what it comes down to. The music that any of us can make with
our beautiful instruments, however they've been upgraded.

HEY Col. I know you already know this because of our history, but many newer folks on the forum don't know me and my guitars as well as you.

As we both know, you got your LUNA and it was Magic from your experience at the store. Then you took it to heavenly.

Then just at the year 2012 I came aboard here with my own 1st SG purchase and your awesome welcoming greeting. This was my 1987 3 Knob SG. Eventually a year or so later I was at my local Music Go Round and brought home a Midtown Custom. That was a killer guitar, but it also had to compete with a Walnut SG Faded Special like yours which I found on the rack first. In the end with some pow wowing with the COL, I phoned the store and within the week, I had returned it and came home with the SG and an extra $700+ refund in the price difference.

The guitar had a wonky controls which I knew at the store and partly led to my original decision to buy the Midtown at first. Once I decided to do the guitar swap, I then made the decision to swap the Gib pots out and install Bournes pots and PIO caps in a 50's wiring setup. This is actually my first and only mod to this guitar which I likely would not have done had the pots worked right. It was a weird malfunction too. It was as if I would lose volume in either the Neck pup or Bridge pup when using one of the tone controls. I may research if it really was a pot problem one day in another guitar, or if it was something like a wire grounding out when it was not supposed to.

In the end, I would rate my Faded SG a 10 for playability. The guitar truly feels perfect in my hands. As for the rest of my experience with this Guitar, I give it an 8 or 9 based on my electronics issues. And this is with 490's in it.

Col Mustard said:
In the end, that's what it comes down to. The music that any of us can make with
our beautiful instruments, however they've been upgraded.
Click to expand...

Edit : the case is a Lifton reissue.

This is really a very good Les Paul, I paid US$700 brand new. 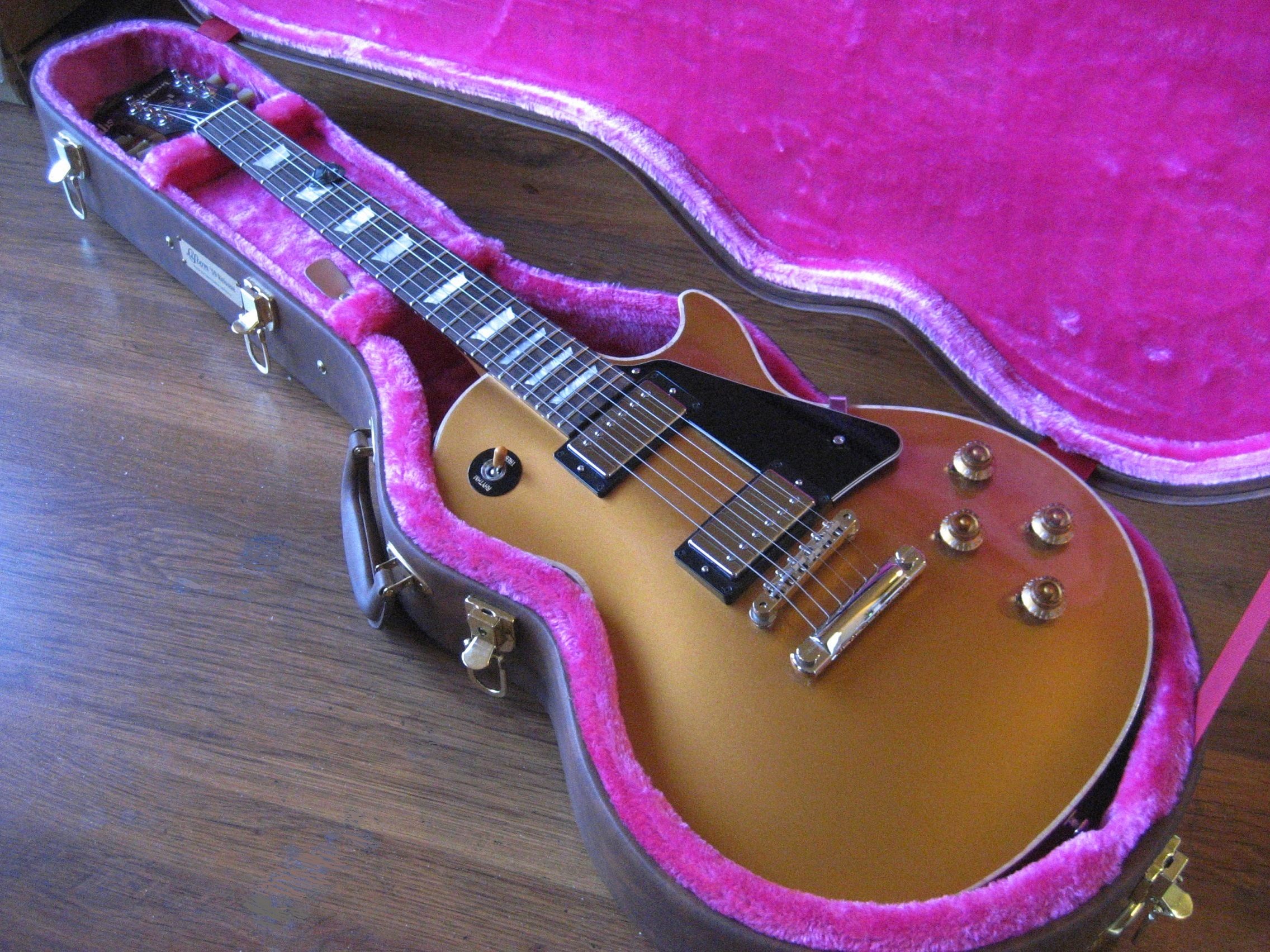